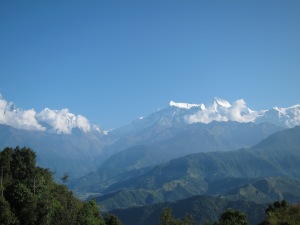 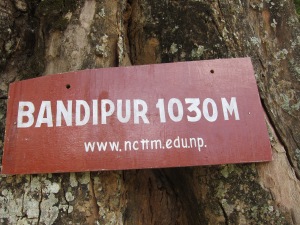 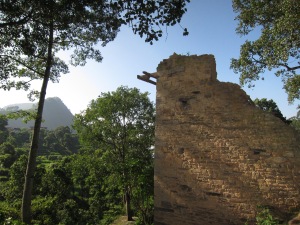 Indeed this morning the skies were clear and I got a good view of the mountains, but the views were much better during my trek since at that time we were much closer to the Annapurna range. While the views here were underwhelming, the true exciting news for today was Good Transportation Karma.

I was not much in the mood for the three-hour walk downhill back to Pokhara. Even though the taxis charged an exorbitant rate — around 1000 rupees for a 25 minute trip — I knew of no other alternative. Unable to find a taxi nearby, I stopped into a restaurant at the top of the hill above the paragliding take-off field to have a masala tea. As I was leaving, I asked the proprietor if there were any buses going to Pokhara. He said there were none, but suggested I walk down the hill to the paragliding field, where I might catch a ride back with one of the vans dropping off the paragliding groups in the morning. Sure enough, as soon as I crossed the field, a big, empty Toyota Hiace van was slowly passing by. I hailed the driver and he took me back to Pokhara for 200 rupees.

After I picked up my bag at the Hotel Nirvana, I immediately found a cab right in front of the hotel to take me to the Prithvi Chowk bus station. Then as soon as I stepped out of the cab at Prithvi Chowk, right in front of me I found the bus headed for Dumre, where I needed to go to get a connection to Bandipur. But it gets better!

Two hours later when we reached Dumre, a local steered me in the direction of the parking area where the shared jeeps to Bandipur congregated. As I was walking up to a jeep, a taxi driver stepped over and offered to take me to Bandipur for 500 rupees. This was probably a reasonable price for the 20 minute uphill trip, but I thought, why waste money and fossil fuel when I can travel with the masses? I told the taxi driver I would rather take a jeep. “No jeeps,” he lied. I told him maybe I would take a bus. He said, “No bus. Bus to Bandipur is full,” and nodded in the direction of a bus pulling away, several meters from where we were standing. I quickly shuffled over to the moving bus, made eye contact with the driver, and asked, “Bandipur?” He said yes, and motioned for me to get in. I scurried over to the other side of the bus and got in as the bewildered taxi driver looked on and realized his mistake.

Anybody who has traveled in Latin America or South Asia knows there is no such thing as a full bus. Even though the bus appeared full as I climbed in, somehow, just like another drop of water is sucked up by those high-tech sponges that soak up a million times their weight (as seen on TV), I was absorbed into the bus. And this bus was not just a sponge — it was a veritable black hole with an irresistible gravitational force, even defying all known laws of physics, pulling in any nearby pedestrian into its vacuous depths.

The bus aisle was jam-packed: people were standing since there were no more seats; a small boy was sitting on a bucket; a girl (maybe his sister) was asleep on some sacks; and there were boxes and bags taking up any interstitial space. Normally the conductor would walk the bus aisle to collect the fares, but since there was no room, I figured I would pay the 50 rupee fare when leaving the bus. Then suddenly I came to the shocking realization that no room was synonymous with full.

I noticed that most conductors on these local buses were skinny youths, but this older man’s physique had strayed somewhat in the other direction, which either hindered or helped his progress through the bus. With his pot-bellied girth he began to steamroll slowly forward, elbowing and squeezing his way through the bus. As he pushed past me on my left, just as a lump in the carpet when pushed down inevitably resurfaces somewhere else, the right side of my Fat American Butt inadvertently invaded the previously unhindered airspace of an unfortunate elderly Nepali man. I was feeling bad about this when I realized that it didn’t bother him in the least, as this sort of thing was likely a daily occurrence for him.

Finally we reached Bandipur at the top of the hill. The bus came to a complete stop and I heard the engine grind down, sputter and turn off, followed by the hiss of the air brakes. Ah, now we can get out of this human compactor, I thought.

A few moments passed, and…no one moved. Just like a full ketchup bottle when turned upside down and struck with the heel of the hand yields nothing — such was our bus. We needed a Himalayan Giant to pick up the bus and give it a good shake or two to dislodge us, but the Giants and other Himalayan Gods were obviously occupied with more important tasks.

Finally, somewhere in the front, Key Passenger Number One, holding everything together like that one strategically placed Jenga block, managed to wriggle him or herself free. (I am sure that if I were nearer I would have heard a popping sound). Then one by one, slowly and not without difficulty, we made our way off the bus. 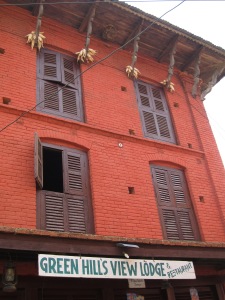 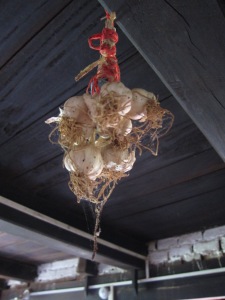 Hanging Out in the Guesthouse 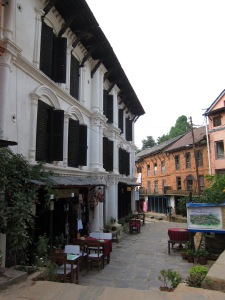