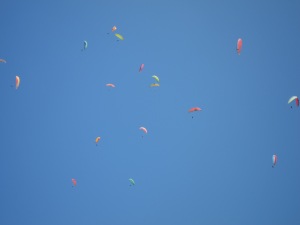 This morning I left my larger bag with the Hotel Nirvana and carrying my daypack I began walking to Sarangkot, a village on a hill overlooking Pokhara. From Sarangkot in clear weather one can get excellent views of the Annapurna range in the distance. Also, I was told that the paragliders took off from this hill and I was eager to get a closer look.

Yesterday I had walked to the north end of Fewa Tal to do some reconnaissance, and with the help of some locals I had located the Sarangkot trail head. When I reached the trail head today, I was able to follow the path in the beginning but after about a half hour I was not sure which way to go. Thankfully a small boy of about six years old pointed me in the right direction. (He even offered to guide me to the top, but I politely declined!).

The climb was quite steep but the trail had flat paving stones clearly marking the way and serving as steps for much of the ascent. After almost three hours walking I looked up at the blue sky and finally saw the paragliders sailing just above me. (When they were very close I even heard their excited laughs). I had fun taking photos of them. Eventually I crossed the small field from which they took off and one of the instructors directed me to the final set of stairs to the village.

I had made a booking at the Sherpa Resort about 10 minutes’ walk from the top of the hill, since my guide-book said it was the hotel that offered the best mountain views. Unfortunately just after I arrived the clear skies turned cloudy and a fog permeated the top of the hill, limiting visibility to only a few hundred meters. The hotel’s owner assured me that the morning would be clear and I hoped he was right. 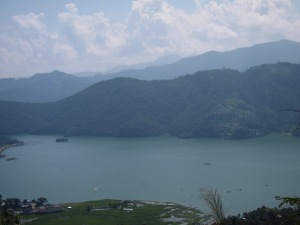 View of Fewa Tal from Sarangkot