Today I started a six-day trek into the Annapurna Conservation Area, met a very funny Korean woman, and got stung by a plant (yes you read that correctly: a plant!).

I met my guide, Mane (Ma-nay) Gurung, around 8:00 a.m. at the Sisne Rover trekking agency office in Pokhara. We took a taxi to the starting point at Naya Pul, then began walking along a trail crowded with other trekkers. After an hour or so, the crowd thinned out as the various groups split off onto different trails.

The trek to Ghorepani and Poon Hill is a relatively short trek that reaches an altitude of only 3200 meters (whereas the Annapurna Base Camp trek climbs to around 4100 meters and the entire Annapurna Circuit route reaches as high as 5400 meters). However, from the lookout point at Poon Hill, if the sky is clear one can see practically the entire Annapurna Range in panoramic view. The trek passes through quaint Gurung villages and rhododendron forests, and offers splendid views of valleys, streams, waterfalls and terraced hillsides.

As the day wore on we climbed the hills and entered areas not accessible to any motor vehicles. We walked through peaceful wooded areas and agrarian villages where the most prominent sounds were of gentle breezes filtering through the trees, flowing streams, children playing, roosters crowing and water buffaloes moaning deeply.

I was taking a photo of this baby goat when the child suddenly inserted himself into the scene. (I hope that goat can breathe! He’s got her in a headlock).

As we walked, Mane pointed out various plants, flowers and trees. Alas, the rhododendrons were not in bloom, but I enjoyed carefully inspecting small colorful flowers along the path. Mane showed me one plant that he described as “poisonous” but as the ancient trails were wide and well trodden we would only run the risk of touching this plant if we strayed off the path.

We took rest breaks every few hours. As we were resting on a stony ledge overlooking a valley, another solo traveler and her guide joined us. The woman gave me a friendly smile and asked, “Where are you from?” I told her I was from New York and she giggled. She said she was Korean and then giggled some more. In between her giggling we spoke about our respective trekking plans and compared notes about our prospective itineraries. It seemed we would be taking the same route for the next few days. We parted ways, and before I joined Mane back on the trail, I took a few swallows of water from the bottle in my pack.

For the last few years when traveling I have made great efforts to avoid using bottled water, and to that end I had purchased a small water filtration “straw” and some chlorine tablets. I carried these in my pack along with a one-liter water bottle, so that I would be able to refill along the way.

At another rest stop near a small guest house I asked Mane if there were a spigot where I could refill my bottle. As I would learn over the next few days, Mane was the exceedingly cautious type, and said, “This water no good, no good! You have medicine?” I told him I had a water filter and purification tablets and he seemed satisfied. He directed me to a spigot that had a hose connected to it. The other end of the hose was obscured in the underbrush, and he showed me where it was.

As I reached down to pick up the hose, I heard Mane yell, “Poison plant!” but it was too late. Oowwwwwwwieeee! What was that? I looked down and saw a small innocent looking plant with tiny, soft green leaves and with some even tinier green fuzz along its equally tiny stem. So harmless looking! The end of my left middle finger felt like it had been stung by a wasp and in addition to the pain I felt tingling and numbness. I squeezed my finger to try to force out the poisonous substance but to no avail.

Mane assured me that it would be “better in five minutes” and indeed after several minutes the acute pain had subsided but it would be over 24 hours before I would have full relief from the pain, tingling and numbness. Who knew a small plant packed such a fierce bite? 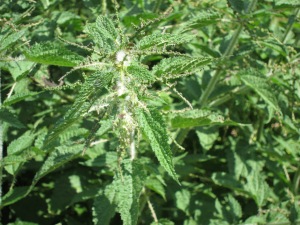 Here is The Culprit, called “Shisnu” in Nepali (aka Stinging Nettle).

A few hours later we broke for lunch in a small village. There was my Korean friend relaxing in the dining area! I said hello and she responded with, “Where are you from?” I thought, Didn’t we already cover this? I again told her I was from New York, and said, “You’re from Korea, right?” Suddenly she burst out giggling, then said, “Same person, same person!” She pointed to her eyes and said, “Grasses — grasses!” I had been wearing clip-on sunglasses when we met a few hours earlier. Apparently she had failed to recognize me without them! She continued on into an uncontrollable fit of giggling.

Along with our guides we walked the trail together for the next few hours until we broke for the night at the Gurung village of Ulleri.