Mandalay was not on my initial itinerary but I decided to go there on a friend’s recommendation. Yesterday I took a morning northbound bus from Yangon. The weather was clear, the highway straight, flat and smooth, and there was little traffic. We made good time and reached Mandalay late afternoon.

Mandalay is a flat city with a gridiron street pattern, and I did not find the city itself very picturesque. However it is considered the cultural capital of Burma and for that reason worthy of a visit.

Today I rented a bicycle from my hotel and rode toward the Royal Palace, which is surrounded by a wall and a moat. As I was not in the mood for royalty, I continued biking along the east side of the palace and to the foot of Mandalay Hill. 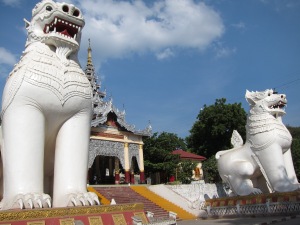 After paying 200 kyat to the bike watchman, then leaving my shoes with the shoe watchwoman (who told me that upon my return she would sell my shoes back to me for 200 kyat) I embarked on the half hour climb up the hill. I enjoyed seeing what seemed to be the more ordinary aspects of Mandalay life: monks praying, vendors hawking small souvenirs and crafts, local tea shops. During the ascent I was accompanied by some foreigners as well as locals. 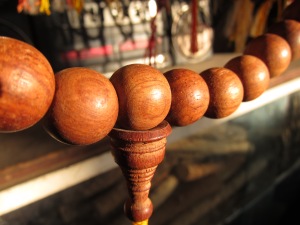 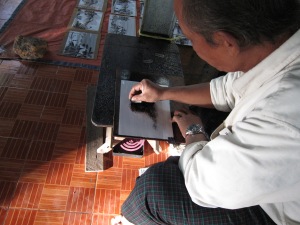 Pagoda at top of Mandalay Hill.

View from top of Mandalay Hill.