I had breakfast in the Tea Garden at the Borderline Cafe, Mae Sot, Thailand.

After breakfast at the Borderline Cafe in Mae Sot, Thailand, I had a tuk-tuk drop me off at the Thai-Myanmar Friendship Bridge. I passed through Thai immigration to get an exit stamp in my passport, then walked across the bridge over the Moei River to Myawaddy, Myanmar. I got some Myanmar Kyat, the local currency, in Myawaddy, then found a shared car to take me to Hpa-an, where I arrived around six o’clock p.m. 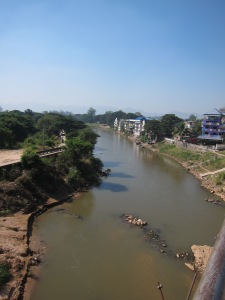 I crossed the bridge over the Moei River on foot.

My experience with Myanmar immigration was unusual compared to my experiences entering other countries. First I walked up to the window indicated for foreign passport holders, and was told to enter a door several meters away. I opened the door and saw a man in uniform sitting at a desk looking busy. He did not acknowledge me. I then asked if I should enter, and after a long pause he said, “yes, come in.” Then he proceeded to ignore me for a few minutes while he moved things around on his desk and shredded some papers by hand. I was the only one with him in the room.

He finally turned his attention to me and gave me a form to fill out. I completed the form and handed it back to him, along with my passport. He reviewed the form and put red checkmarks next to items, then told me to go to a window to his left. At the window another uniformed official took a few minutes making copies of my passport, after rubbing down the bottom of the first page several times with a ruler and an eraser.

Meanwhile a very unofficial-looking youth in a longyi, a traditional sarong worn by Burmese men, entered the room and asked me where I was from. I told him I was from the USA, and he said what sounded like “mixed salad.” A few minutes later, after the official had stamped my passport, the youth said, “your parents, you: mixed.” I wasn’t sure what he meant, but I imagined it had something to do with my being from the USA yet looking like a Subcontinental Asian. I explained that my parents were from India, and that seemed to satisfy him.

The youth leaned back in his chair, cutting a sharp contrast with the rigid, uniformed immigration official at the desk next to him. Then he asked if I needed to change money. I told him I did, hoping he would suggest a bank nearby. Instead, he said, “you can do it right here,” while the immigration official nodded slightly. I declined, thinking the whole scenario was too strange for me to stay a minute longer, and went down the street where I found an ATM.

Negotiating the ride in the shared car was challenging as the driver and his colleague spoke little English. They also kept asking for copies of my passport, which sounded strange to me, but I complied when the driver took me to a copy shop a few blocks away from where we met. There was a lot of talk back and forth between the driver and his colleague, and they scrutinized my visa and immigration stamp very carefully.

I understood later why they needed the copies, as we passed through police checkpoint after police checkpoint, and the driver periodically gave a copy of my passport, visa and entry stamp to some official-looking person. There are many areas in Myanmar where foreigners are not allowed, so the driver was just being prepared to be sure we complied with the rules. 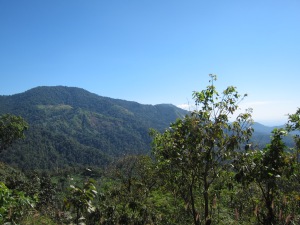 From Myawaddy to Hpa-an, Myanmar.

A caravan winding through the mountains.

During the six-hour journey covering about 150 km, mostly through scenic, mountainous terrain, I learned that my driver and carmates were very kind and generous people. During the ride they laughed and joked often, including me in their banter even though we couldn’t understand each other.

We stopped for lunch at a small roadside shop where we all ate together at a table, and one of the ladies in our group paid for all of us and even bought me a bottle of water. She refused when I tried to reimburse her for my meal and the water. Whenever we stopped my driver made sure to direct me to the bathroom. 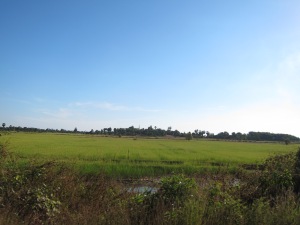 For most of the six-hour journey the landscape had no cell towers, no high-tension power lines, no utility poles..just nature. 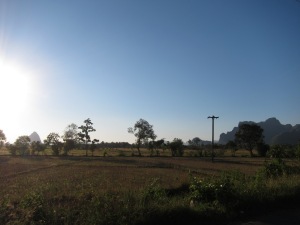 A tiny utility pole on the right. Power to the People!

At one point I somehow lost my phone, and they stopped the car and we all joined in the search. When it didn’t turn up, my driver said we should “rotate” and we went back to where we had stopped a few minutes earlier. There was my phone on the dusty shoulder where I had somehow dropped it. (Later I found out that our car had run over it. I did not tell the driver as I thought this would upset him).

At the end of the trip the driver made sure I got to the front door of my guest house in Hpa-an, carried my luggage up a flight of stairs, and to my disappointment refused to accept my tip.