The bus station was conveniently a few minutes’ walk from my Kathmandu hotel, so I packed up the two bags that carried my current worldly possessions. I put on the backpack and slung the other bag over my shoulder. Several sources had told me the bus ride would be “six to seven hours,” but I reminded myself that they were speaking in Desi time, which really meant “eight to nine hours or maybe longer – who knows?” Amazingly, the bus left on time, and I was installed in the middle seat in the back row, so I had room to stretch my long legs during the journey.

Now, Google Maps indicates that the distance from Kathmandu to Pokhara is all of 202 km (125 miles), which on a U.S. or Canadian highway would take less than two hours. But to cover this distance here in Nepal the road rises, falls, and curves around hills and mountains. At times we proceeded more slowly than a snail on a bicycle, meaning we were stopped altogether for long periods. There was very heavy traffic, consisting mostly of trucks and some buses, trying to push both ways through narrow, winding roads, leading to bottlenecks and blockages.

Next to me on the bus was a young Japanese woman going to Pokhara to meet up with her guide for a six-day trek into the Annapurna area. She said she worked in a department store selling children’s clothing, and since, like most Japanese, her job only gave her 15 vacation days per year, she had quit her job in order to travel for a few months. In the last several weeks she had already traveled around China and Myanmar, and Nepal was her last destination prior to returning home to Kyoto (n.b.: my fellow traveler informed me that if you see Hello Kitty in Kyoto, she will be wearing Kimono). She had studied English in Australia for three months and was very fluent so we had no trouble communicating. Clearly she enjoyed traveling — she said she had been to over 50 countries! We shared some stories of countries that both of us had visited, and she gave a happy thumbs up for Thailand, where I was planning to go after visiting family in South India.

We finally arrived in Pokhara around 4:00 p.m. I was able to orient myself by reviewing a few Lonely Planet maps, and (smartly as it turned out) I waved off the taxi drivers and followed the street around the lake until I reached my hotel, less than ten minutes from the bus stop. 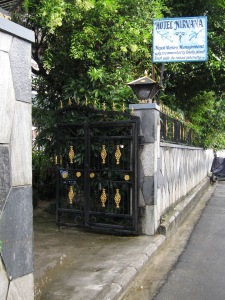 Hotel Nirvana was nicely situated several minutes’ walk from the busy tourist strip, almost hidden behind its front garden. After checking in I had planned to take a stroll into the central area to have dinner, but the skies opened up and poured down a torrential, constant shower of rain for a few hours. So I raised my umbrella and walked right across the street and had a pizza at the Caffe Concerto, where I also availed myself of their fast WiFi connection.

Finally the rain subsided and I walked up and down the tourist strip, observing the signs for the various hotels and bars, and peering into some of the shops strung along “Lakeside” as this area is called, since it borders Fewa Tal (lake). 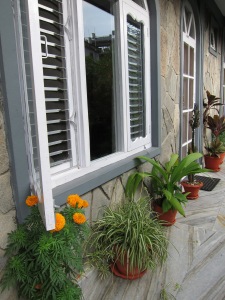 Pleasant Plants Near My Door