My first full day in Nepal! I got up early and headed out to breakfast at the Fire and Ice Cafe across the main street from the alley where my hotel was situated. I then spent the better part of the day following my Lonely Planet guidebook’s walking tours of the Durbar Square and Old Town areas. I lost my way a few times but managed to get back to familiar environs easily.

I saw very few other tourists along the way and I got a chance to see ordinary Nepalis going about their daily routines. The traffic was challenging — the roads really no more than alleys, semi-paved with flat stones and sometimes with asphalt or concrete. Sidewalks were nonexistent. Through these narrow arteries coursed all kinds of vehicles: mostly motorbikes but also many cars, some bicycles, the occasional cycle rickshaw, and, unbelievably, large trucks. Congestion was rampant. We multitudes on foot threaded our way around, between, alongside, and (daringly) straight through the paths of those on wheels.

As I walked I took note of the ancient stupas, temples, and various Hindu and Buddhist sculptures around which the city’s buildings had grown like large tree roots grow around boulders. Many of the buildings were decorated with intricately detailed wood trimmings. There was a small 500-year-old statue of Vishnu nestled between the entrances of two shops. The statue was so small I would have overlooked it had my guidebook not made mention of it. The locals were not oblivious to this sacred icon in their midst — it was adorned with fresh flowers and vermilion-colored powder.

My favorite spot in my meanderings turned out to be a narrow, cobbled alley that snaked between tall houses, creating a cool quiet path away from the nearby noise and bustle of Indra Chowk. Small shops selling brass-ware, incense, embroidered clothing and trinkets lined this alley. I stopped for a soda at a tiny storefront shop, where I sat on a small stool perched on the slightly elevated floor of the shop, looking out into the alley, while the shop’s middle-aged proprietress curiously gazed at me.

After resuming my walk and finally returning to the center of Thamel, I ducked into a cafe and had some tea and steamed Tibetan dumplings called momos. Similar to my hotel the Revolution Cafe was down another alley off the main street, and it had a small garden in the back. As it turned out, I would return a few more times to this Kathmandu hipster joint, prior to leaving the city. 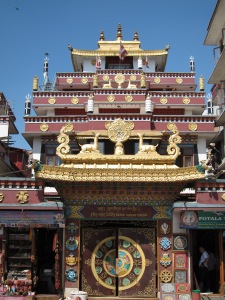 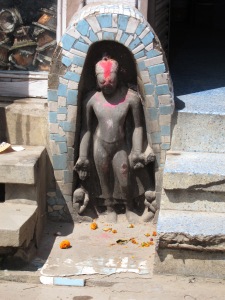 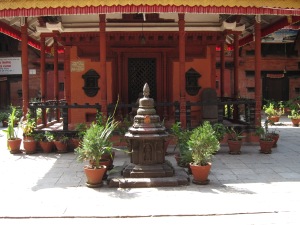