It was a dark and stormy night.

OK, I made that up. It was broad daylight, the temperature was around 30 degrees Celsius, with the sky a hazy mix of mid-morning sun and clouds.

As my flight touched down at Kathmandu’s Tribhuvan airport, I took note of how small the airport was. There was a white UN plane parked on the tarmac near the gates. Otherwise we seemed to be the only flight arriving at that time. We were herded onto a few waiting buses that drove us to the terminal (which seemed like walking distance from our aircraft in any case).

The terminal was a small two-story affair, relatively quiet and calm in comparison to even the Columbus, Ohio, airport, where I began my journey. The airport staff was minimal and spoke little English, yet I found them to be sincere and helpful. It took maybe 20 minutes for me to complete the required visa forms, wait in line, pay the fee and obtain my 30-day visa. I had struck up a conversation with a young Dutch woman on the flight, and we helped each other negotiate the visa forms and payment process.

I walked out the gate to a small crowd of the usual taxi touts. The Blue Horizon Hotel was to have sent a taxi for me. I was told to look for someone holding a sign with my name, but after 15 minutes or so of waiting and surveying the landscape I saw nobody holding such a sign nor any sign with the name of the hotel. I took a few minutes to get some cash from the ATM then got a taxi to take me to my hotel.

My hotel was located in Thamel, the bustling tourist enclave in Kathmandu. My room was on the second floor, and a few steps from my room there was a landing/balcony where I could get WiFi, which did not seem accessible from my room. There was a pleasant garden and the hotel was set off a few hundred meters from the main street down a long alley, so it was relatively more tranquil.

My arrival and check-in went smoothly except for a guy who initially seemed he was from the hotel but turned out to be selling the services of his tour company nearby. He was very polite but I found it annoying to be sat down and fed a bit of a sales pitch under the guise of an orientation to the area, given that I had just arrived after 24 hours of air travel. The one consolation was that they brought me a complimentary cup of masala tea, which I sipped while nodding drowsily as I feigned interest.

I had a hot shower, took a nap for a few hours, then ventured out for a stroll around Thamel, to get oriented a bit. Hopefully I would be over the jetlag tomorrow so I could begin to get to know Nepal a bit. 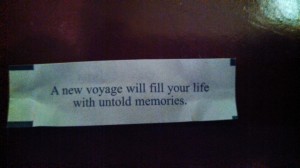 Found Inside a Fortune Cookie in New York City, 2014