Yesterday I traveled several hours by bus from Bangkok into the heart of Isaan, which is what the Thais call northeast Thailand. My destination was Khon Kaen, where I would stay a day before continuing my journey north to Laos.

On the way the woman next to me started a conversation in her limited English. She was a sixty-ish primary school teacher coming back from a conference in Bangkok, and was curious as to why I was traveling in northeastern Thailand (which apparently does not see as many tourists as other regions). When we reached Khon Kaen, she took it upon herself to figure out where my hotel was located, then found a taxi for me and negotiated the fare. On my own I would have eventually made it to the hotel, but her intervention expedited the process and set my mind at ease.

Khon Kaen is a small city characterized by its university and art scene. My main goal in staying the night in Khon Kaen was to break the long bus journey to Laos into smaller parts, but while I was here, I figured I would try to do something useful with myself.

Inside of Wat Nong Wang. 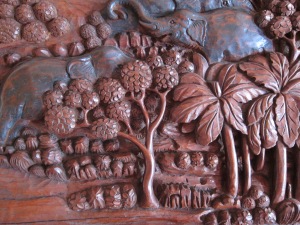 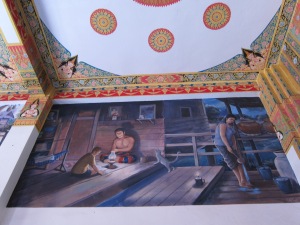 Today I took a stroll from my hotel, heading south to the Bueng Kaen Nakhon lake. I walked a bit near the lake, and then visited Wat Nong Wang with its giant and colorful stupa. I climbed up to the top of the stupa and took some photos of the surrounding area.