This morning I caught the bus back to Sukhothai Historical Park.

Just like yesterday, as soon as I got off the bus, there were several women jumping up and down holding signs that said “bicycle” while calling out “bicycle! bicycle!” with big smiles on their faces. Competition is fierce! This time I rented from another outfit right next to the one I used yesterday, to tour the western region of the park.

The western region is the largest in area and the ruins are spread out and in poor condition. Because of this, it is not a priority for tourists, and fewer people visit the area. This proved to be an advantage for me as I was able to enjoy some peace and quiet while riding around the ruins.

Brick worn down over centuries. 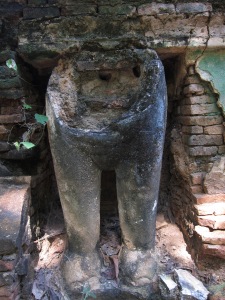 Remnants of an elephant.

I didn’t knock it over — it was like that when I got here!

At one of the sites I was joined by a whole herd of grazing cows. One of them nuzzled me as I was trying to take a photo, and I turned and said “Hello There!” in English, which did not elicit any response from the cow, who likely only knew Thai.

Can you spot the Grazing Cow? There were several behind me too.