There is Water Everywhere!

We continued trekking along the route to Ghorepani. Heebeom, my new Korean friend, and her guide were heading the same direction so she and I ended up chatting a bit more. However communication was difficult as her English was not as good as I had initially thought. At one point she said, “Sorry — my English very small!” I told her my Korean was even smaller than her English. The only words I knew were “Kamsamanida” (thank you), “Oppa/Unni” (big brother/big sister) and “Kimchi” (kimchi!). She giggled some more, then said , “Bibimbap!” Still, I was able to learn that she was almost 40, worked as an accounting manager in Seoul, and had saved up two years’ of her vacation days to enjoy a 20 day tour of Nepal, including her trek to the Annapurna Base Camp. 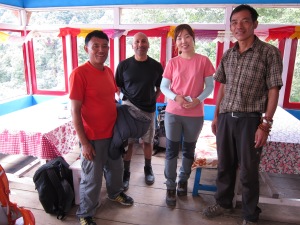 The Trekkers & Their Guides

We continued to climb, up, up and further up. The trails were well established and often paved with flat stones quarried from the hillsides. These same stones had been embedded into the steeper parts of the trails, creating a seemingly endless spiral stone staircase that we would climb for hours at a time, with frequent rest stops and water breaks. 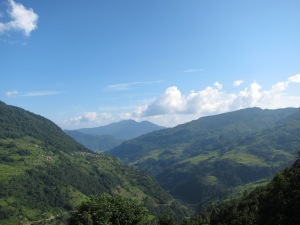 A few more words about water in Nepal. Water is both abundant and scarce here. I witnessed this abundance in the torrents of water streaming down the mountains and hills into powerful rivers that often thundered down towering waterfalls. Throughout my trek I could almost always hear water: the trickling of a stream, the distant white noise of a river somewhere, the roar of a nearby waterfall. Several times each day we would cross a bridge over a deep river or walk across the rocks of a shallow stream. This abundance of water combined with the mountainous terrain creates a huge potential for hydroelectric power.

While water itself is plentiful, oftentimes villagers have to trudge kilometers to reach the nearest stream or river. In the villages we passed through water never seemed to be a problem — it was obtained by diverting it through hoses or pipes from a nearby uphill stream or river. However not all villages shared this luxury, and in the lower hills and valleys with higher population density and increased sources of pollution (industrial as well as human and animal waste), potable water was in short supply. 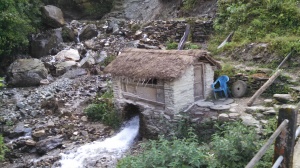 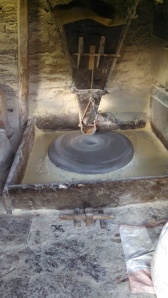 With this in mind I tried to be mindful of my water use, making sure to completely turn off spigots, take shorter showers than usual, and flush minimally and only when absolutely necessary! 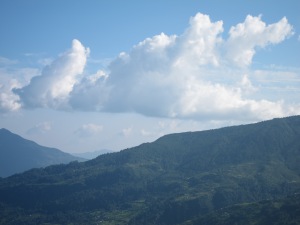 After several hours on the trail we reached Ghorepani where we spent the night. Mane explained to me that in Nepali “ghore” means horse and “pani” means water, so it seemed likely that this village had its origins as a rest and watering spot for horses on the trail. I learned that many villages in the area had “pani” in their name, another reminder of the importance of water. For example a village further down the trail was named “Tadapani”, meaning “far water” — according to Mane, in the early days of the village its residents had to walk a long way to fetch water.

Before dinner I sought to refill my water bottle, and the young man of the house pointed me toward a spigot. He pulled off a hose that was connected to the spout, allowing me to fill my bottle directly from the spigot. When I had filled my bottle halfway, I suddenly heard, “Pani, Pani!” from the kitchen window. Apparently in order to fill my bottle we had cut off the water flow to the kitchen when we removed the aforementioned hose! A good example of how our actions impact others. In fact, also a good example of how our own actions impact ourselves, because among the other activities taking place in the kitchen was the preparation of my own dinner.

We retired early to prepare for a 4:00 a.m. Friday departure to reach the Poon Hill lookout at sunrise. At 3000 meters the night was cold and I wore my thermals, sweater, hoodie, and anything else I could find in my pack, and quickly drifted off to sleep. 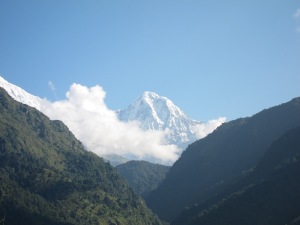