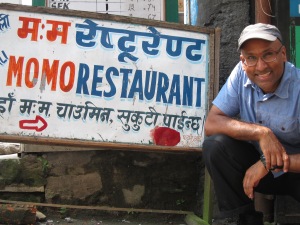 Today I did very little. I was tired from yesterday’s hike up to the Peace Pagoda so I slept in a bit. Then I ventured out to wander around the lakeside and take some photos of the lake and nearby mountains. Above the hills in the distance was the striking peak of Machhapuchchhre (Fishtail Mountain), almost 7000 meters at its apex, jutting up like a carved white arrowhead between some clouds. I took a few photos but was unable to get a good shot due to the clouds.

I bought some postcards and stamps at a local bookstore, then had a pot of tea on the balcony of the Rainbow Restaurant near my hotel while I addressed and wrote notes on the cards. From my perch on the balcony I had a good view of the Peace Pagoda in the distance.

As usual, the waiter at the restaurant asked where I was from, and we spoke briefly about his interest in hip-hop culture, which originated in the South Bronx (I gathered from our talk that he had no idea of its origins, nor any idea of where the South Bronx was!). He pointed to his low-slung jeans, and, palms down, waved his arms around a bit, as if he were a Nepali rapper.

Given that this is a tourist town, it is not surprising that local people would ask where I am from. However, they almost always seem dubious of my answer. After all, how could a brown desi-looking dude be from New York?

Here is a standard scenario: “Where you from?” New York, I say, and receive a blank stare. Maybe they don’t know of New York? I then clarify by saying, “I’m from the USA.” Then, “You look like Nepali.” I tell them my family is from India, but that I was born and grew up in the USA. Blank stare. Then, “Yes, yes, India, your face: Indian. You from India! Which part?” I tell them I have family in Bangalore. They ask, “You have house in Bangalore?” I tell them I stay at my relatives’ home there when I visit. “No house? then where you live?” I decide this is a losing battle and try to end the conversation. But next, “You speak Hindi?” I tell them no, I don’t speak Hindi. They look very suspiciously at me then say, “You Indian, but don’t speak Hindi?!” After this I never quite know what to say. I see pity in their eyes as the homeless desi who can’t speak his own language says goodbye in English and walks off down the street.

This evening I decided to try the “chili momos” at a local restaurant, on the recommendation of Gus, the Dam Guy. Wherever they served momos, I noticed that the menu listed three types: steamed, kothey and chili. The basic momo is a steamed half-moon shaped dumpling filled with your choice of meat or vegetables. “Kothey” dumplings are steamed, then pan-fried on one side. Chili momos are kothey momos doused in a chili-tomato sauce.

When the waiter came over, I ordered a lemon soda, then the chili momos. “Wedge or Buff?” he asked. What could he mean? “I’m sorry could you repeat that please?” I asked. “Do you want wedgetable or buffalo inside?” Ah yes, of course. “Thank you, I’ll have the wedge, um, veg please.”

The momos arrived covered in a rich, dark sauce, interspersed with chunks of sautéed green peppers and onions, and garnished with a few slices of raw cucumber and carrots. They were very tasty, but hot, hot, HOT!! I used the lemon soda to cool down, and when that proved ineffectual, I found the slices of cucumber provided a temporary respite. Now I know what “cool as a cucumber” really means! By the time I finished, I was sweating, my nose was running, my eyes watering, smoke was rising around me, and I was in grave danger of Spontaneous Human Combustion. But I did enjoy the momos and I plan to go back for more! They were every bit as good as Gus suggested. 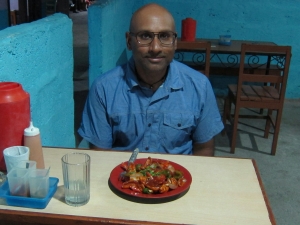